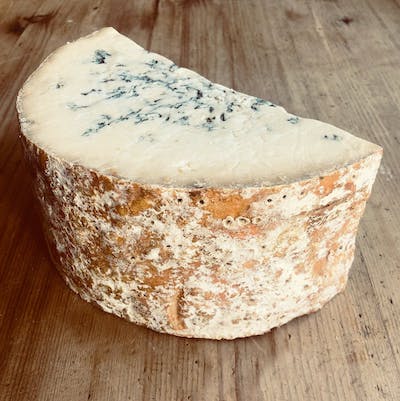 What Is Blue Cheese? Blue Cheese is a type of cheeses that contain cultures of Penicillium mold added. This mold gives the cheese its distinctive smell as well as the blue, or blue-grey veins.

Blue cheeses are usually aged in a temperature controlled area such as a cave.

Blue cheese can be eaten by itself, however the distinctive sharp and slaty flavour makes these blue cheeses ideal for cooking.

Our 9 Most Popular Blue Cheeses Stilton is an English cheese, that’s made in two varieties – blue (with penicillium roqueforti) and white (with none).

Stilton is made from pasteurized milk and was first sold in the village of Stilton (UK). However there are no records confirming it was made there.

Stilton has been granted the status of a protected designation of origin (PDO) by the EEC. This means only cheeses produced in Derbyshire, Leicestershire and Nottinghamshire may be called Stilton. So not even a cheese produced in the village of Stilton (Cambridgeshire) may use the distinctive name.

Since September 2016 there are now just 6 dairies licensed to make Stilton. The Colston Bassett PDO is made at one of these.

To be called “Blue Stilton”, a cheese must:

What is the best way to eat Stilton?

Blue Stilton is often eaten accompanied by pears or even celery. Alternatively it can be eaten together with bread, crackers or biscuits.

For cooking Stilton is great added to vegetable soup, most often to a cream of celery (or broccoli). Another great use for Stilton is to make a blue cheese sauce and drizzle this over a steak.

For vegetarians Stilton works beautifully when crumbled over a salad and to my mind far more interesting than feta cheese.

What is Stilton Paired with?

The popular pairing is a blue Stilton with either a barley wine or a port. However to my mind it also goes very well with a sweet sherry or a Madeira wine (also sweet). Stichelton is a blue cheese similar to Stilton that difers in that it is made from raw milk and does not use factory produced rennet.

Interestingly the name comes from the Doomsday book of 1086 that refers to the village of Stilton as Stichiltone/Sticiltone as this cheese cannot legally use the name Stilton.

ForbesLife magazine described Stichelton  as “a sumptuous cheese that sets a full-flavored, succulent, complex chain of sensations going in your mouth: fruity and salty, buttery, and earthy, sharp and creamy.” Cropwell Bishop Creamery, the makers of Beauvale are also one of the 6 dairies licensed to produce Stilton.

Carefully developed to perfection by ROBIN SKAILES and Howard Lucas at Cropwell Bishop Creamery, to create a milder creamier blue that stands out from their usual stilton.

This beautiful blue cheese is great for Stilton fans who prefer a milder melt in your mouth cheese.

This cheese is certainly creamier that the Stilton they make at this creamery. Blacksticks Blue is Suitable for vegetarians

The award winning Blacksticks® Blue is the original farmhouse blue veined cheese. It is made from pasteurised milk of the Butlers family herd of pedigree cows

Blacksticks® Blue is crafted in open vats, then poured into individual moulds, turned by hand and matured.

The cheese is aged for about 2 months during which it develops a distinctive amber hue along with a delicious smooth creamy & tangy taste.

This is a cheese loved even by people who normally don’t like blue cheeses and adored by those who do. It is soft enough to spread on to a slice of bread or cracker as well as used in cooking. Roquefort is a French blue cheese made from sheep milk, and one of the best known blue cheese in the world.

Similar cheeses are made however EU law dictates that only cheeses aged in the caves of Roquefort-sur-Soulzon may use the name Roquefort.

Roquefort is a white, crumbly cheese with distinctive veins of blue mold. This distinctive mold (Penicillium roqueforti) is what gives the cheese it’s tangy flavour.

Often called “The King of Cheeses” Roquefort has no rind and it’s shell is salty and edible. After his musical success with Blur Alex James has made his mark in the production of high quality cheeses.

Blue Monday is a sharp tasting creamy Shropshire Blue that has a very slight sweetness. This is cheese made from rich pasteurized cows milk and aged for 12 weeks.

It has a soft creamy texture with an intensely savoury and spicy falvour. Crowned “World Champion” at the 2013 World Cheese Awards of the Guild of Fine Food.

Montagnolo Affine is a German blue cheese that is surface-ripened, and made with triple cream cheese with a soft, smooth natural rind.

The cheese is aged at low temperatures that allow it to develop it’s aromatic and spicy flavours.

Similar in taste to a triple crème brie this is a cheese that pairs well with full bodied red wines. It is also a great blue even for those who may not be the biggest fans of blue cheese. Gorgonzola originates from Italy and it is claimed that the cheese was first made in the village of Gorgonzola near Milan.

This blue cheese is made from unskimmed cows’ milk to which starter bacteria are added with spores of the mold Penicillium glaucum.

The cheese is then aged at low temperatures.

As the length of this ageing process also determines the consistency of the resulting cheese there are 2 main types of Gorgonzola and these are:

Gorgonzola Dolce – which translates as sweet Gorgonzola. This variety is aged less and so also more crumbly than the Gorgonzola Piccante . It is a full flavoured cheese with a thin natural rind.

Interestingly the Gorgonzola Dolce DOP was the 2014 “World Champion” of The Cheese Awards just a year after Montagnolo Affine.

Gorgonzola Piccante which is also called Gorgonzola Naturale. This is a firmer and as the name suggests a spicy tasting cheese. This has a thicker rind than the Dolce variety.